The only vineyard of its kind on African soil 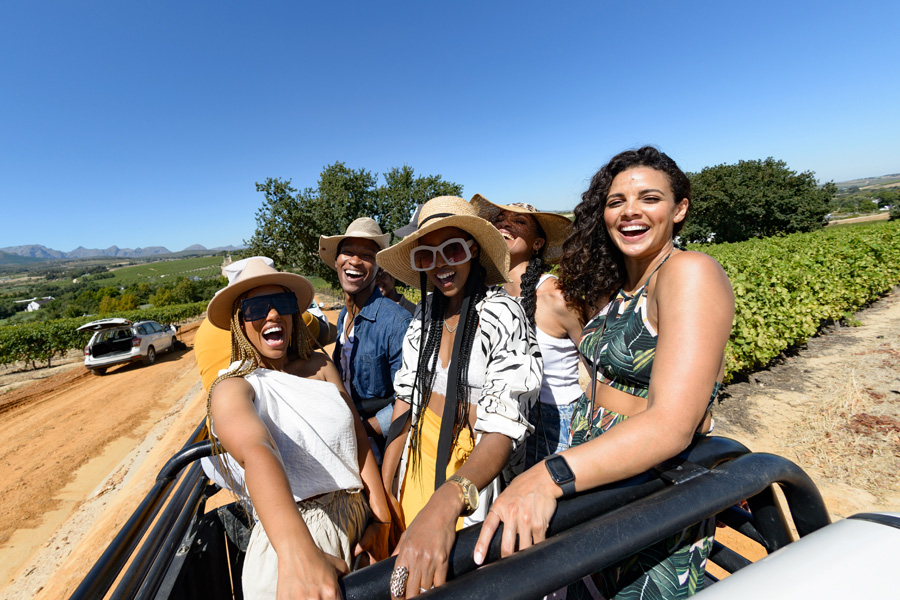 Harvest! It’s happening at a vineyard near you!!

Forget sipping cocktails on the strip in Camps Bay, forget turning up under the Jozi skyline, picking grapes in a vineyard in the Winelands and then watching them get crushed in a press and aged in a barrel to make beautiful red wine – that’s where it’s at this season!!

A bunch of special friends and extended family did just that last week when they gathered at the Bosman farm in Wellington to begin harvesting Nero, a one-of-a-kind grape grown exclusively by them in South Africa, with partner actor/producer Thapelo Mokoena of Bakoena Brands. 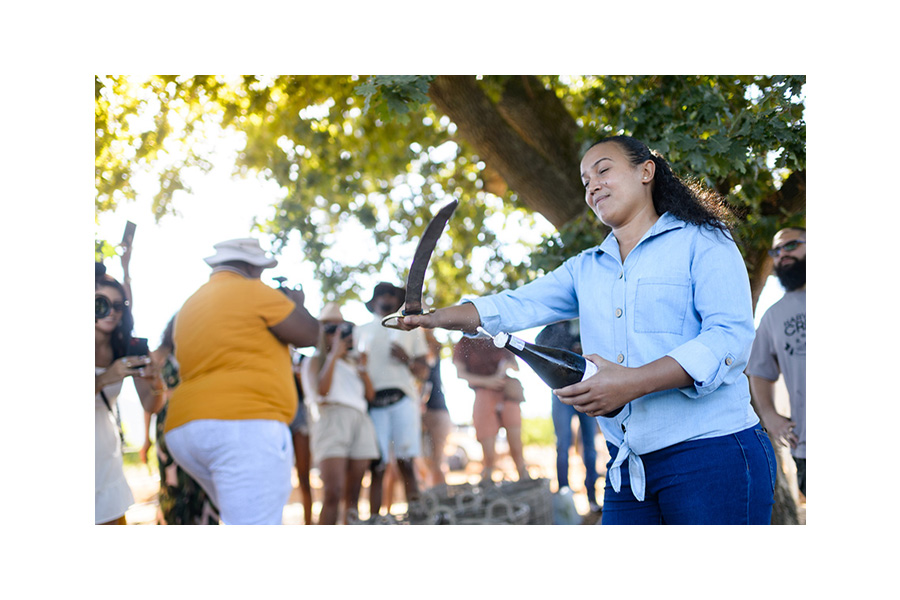 Jumping onto ‘bakkies’ armed with secateurs and a basket, then zooming up into the vineyard under a bright summer sun, the group started harvesting Nero under an oak tree (as one does!) with a sabraged glass of Loose Cannon, the Bosman Cap Classique.

Then it was all hands-on deck as the group scavenged for the heavy bunches of dark red grapes, learning all about optimum ripeness and vineyard management from winemaker Natasha Williams. Then back down the mountain to the cool cellar to see the grapes being sorted, destemmed and crushed, and a quick trip past fermenting tanks, before gathering in the 270-year-old barrel cellar where Natasha explained what winemaking was all about:

“People like to debate whether winemaking is an art or a craft, but it’s actually a story. Each barrel tells a different story, and my job is to blend these individual stories together to give a holistic picture of the terroir. And terroir is not just the soil, the microclimate and the slope, it’s also about all the people along the way who have helped form the wine’s ultimate story. A winemaker has to listen carefully and respect the contribution of each component.” 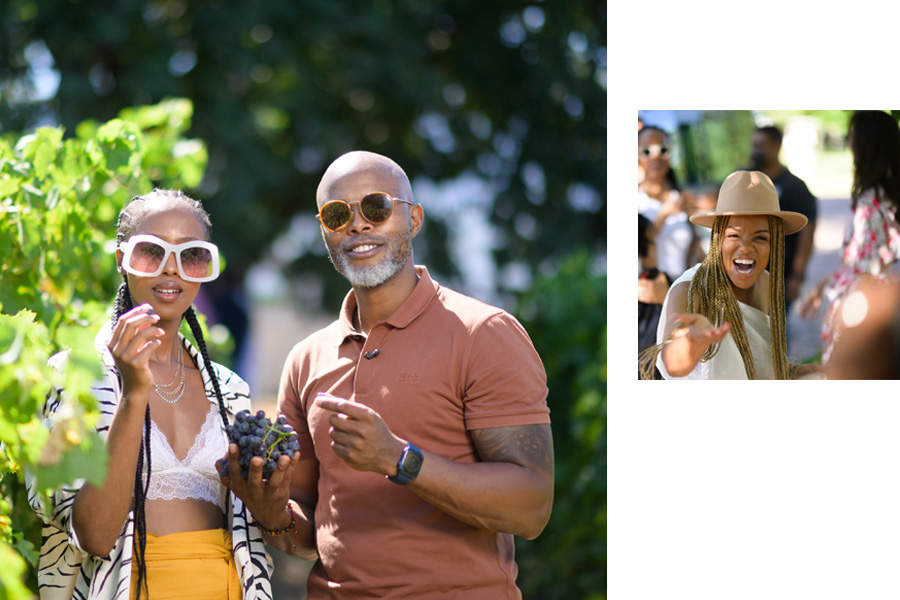 Every year the Nero grapes are harvested by Petrus Bosman and his family, joined in the last few years by Thapelo and his wife Lesego, and this year a few special people joined in too. It was a special occasion, because these are special grapes and here’s why: At the dawn of the 21st century, climate change started rearing its frightening head, and farmers started worrying about the sustainability of their crops as the world threatened to become hotter and drier. Always one for a challenge, Petrus Bosman visited the island of Sicily where grapes thrive in the hot, dry climate and are planted in volcanic soils, very similar to the conditions on their farm in Wellington. There he found the Nero d’Avola grape which seemed un-phased by heat and desiccation, producing the luscious fruity wines for which Sicily is famous.

So he brought a few cuttings back to the farm, only 2 survived, but eventually they were able to propagate enough to plant a vineyard after which began the laborious process of certification and in 2014 the first vintage of the first South African Nero d’Avola was produced. Since then, Natasha has been involved in every vintage, working diligently to refine the Nero wine into something that honours its Sicilian history, but also tells the story of African resilience and passion:

“Making wine is a journey, it’s a marathon not a sprint, because the wine speaks, and you have to listen to it and then help it express itself. It’s a sensitive, humbling process.” 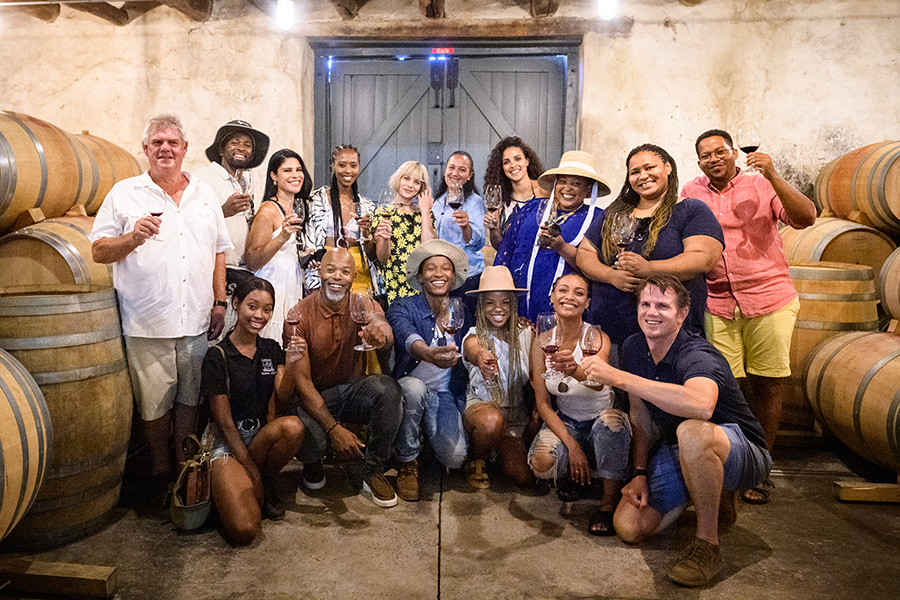 The guests got to taste the 2021 vintage directly from the barrel, and then enjoy more of the previous vintages, and other Bosman wines, over a loud and lovely lunch served in the cellar that stretched long into the late afternoon. Amongst them were: Master Chef’s new judge Chef Zola Nene; Jamie-Lee Domburg of the Expresso Morning Show; actress Nicole Madell; presenter Katlego Maboe; actress Tarryn Wyngaard; winemaking student Kari Masoleng; actor and funny guy Sobantu Nqayi with his lovely lady Amron Siebritz; and model Imaan C Mac Quena, to name but a few.

“What a memorable experience for all! It changed each harvester’s view of wine, from a simple liquid in the bottle, to a rich and intricate story of people and nature working together for the best possible outcome,” said Mokoena. “The day also reminded us of the value of sharing with friends and family and celebrating our connection to each other and to the land we love so dearly.”

Petrus and Thapelo have their sights set on introducing this special varietal to every corner of Africa and beyond.

“We’re conquering the world one bottle of Nero at a time.”

We use cookies that help us provide you with the best possible shopping experience. These cookies are used to collect information about how you interact with our website and allow us to remember you. We use this information in order to improve and customize your browsing experience. By clicking “Accept All”, you consent to the use of ALL the cookies. However, you may visit "Cookie Settings" to provide a controlled consent.
Cookie SettingsAccept All
Manage consent

This website uses cookies to improve your experience while you navigate through the website. Out of these, the cookies that are categorized as necessary are stored on your browser as they are essential for the working of basic functionalities of the website. We also use third-party cookies that help us analyze and understand how you use this website. These cookies will be stored in your browser only with your consent. You also have the option to opt-out of these cookies. But opting out of some of these cookies may affect your browsing experience.
Necessary Always Enabled
Necessary cookies are absolutely essential for the website to function properly. These cookies ensure basic functionalities and security features of the website, anonymously.
Functional
Functional cookies help to perform certain functionalities like sharing the content of the website on social media platforms, collect feedbacks, and other third-party features.
Performance
Performance cookies are used to understand and analyze the key performance indexes of the website which helps in delivering a better user experience for the visitors.
Analytics
Analytical cookies are used to understand how visitors interact with the website. These cookies help provide information on metrics the number of visitors, bounce rate, traffic source, etc.
Advertisement
Advertisement cookies are used to provide visitors with relevant ads and marketing campaigns. These cookies track visitors across websites and collect information to provide customized ads.
Others
Other uncategorized cookies are those that are being analyzed and have not been classified into a category as yet.
SAVE & ACCEPT